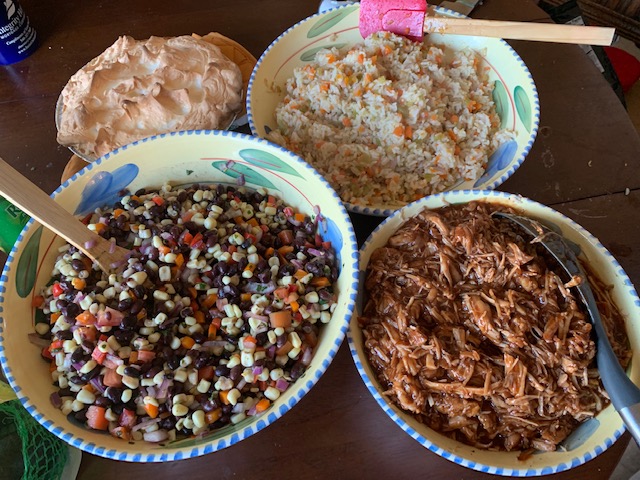 Pulled pork is one of those dishes that just makes you happy. Usually you cook the pork for anywhere from 7 to 9 hours to get it to its most scrumptious, fall-apart doneness. I found a 7-lb pork loin at Costco (I LOVE YOU, COSTCO!) that I would swear jumped up and down in the refrigerator compartment, yelling “Buy me! Buy me!” It was beautiful. The only problem was that I just did not have 7- 9 hours for cooking. I had church to attend and Flora’s family was coming over right afterward. Her husband had to work that evening, so we wanted to prepare the meal as quickly as we could.

Enter the Instant Pot. I was going to use my electric pressure cooker, but it, uh, died. Flora’s husband, David, ran home and grabbed her Instant Pot for us to use. We decided to follow most of the Pioneer Woman’s recipe for Classic Pulled Pork, but we would use my own experience with pressure cooking to cook it in the Instant Pot instead of the oven. Now that we knew we were going to cook the pork, we planned out the rest of the meal.

We chose to cook the Pioneer Woman’s Classic Pulled Pork from her Dinnertime book, pages 228-300. We knew we would have to make some slight changes to the recipe, but they would be few.

To accompany the pork, we chose Rice Pilaf, also from Dinnertime, pages 320-321, and one of my favorite Black Bean and Corn salads, sort of like a Cowboy Caviar, but without blackeye peas and hot peppers. For dessert, we had my favorite Lemon Meringue Pie, which nobody makes better than Flora!

Starting with the Pork

The Pioneer Woman’s recipe for pulled pork calls for a pork butt/shoulder to be cooked whole. Since I was going to use an Instant Pot and needed to make as much as I could fit in it safely at once, I decided to slice that beautiful loin into chops about 1-1/2″ thick. You make a rub out of brown sugar, chili powder, paprika, garlic powder, salt, black pepper and cayenne. Ideally you would rub it all over the pork shoulder, wrap it tightly with plastic wrap, and refrigerate several hours or overnight. I ended up rubbing it into each loin slice and wrapping the slices individually. They were refrigerated for about 2 hours.

I knew I would need to cook the pork in the Instant Pot for 35-40 minutes under pressure, so Flora and I decided to chop the vegetables for the pilaf and make the black bean and corn salad before cooking the pork, to give it time for the flavors to marry.

This is one of my favorite go-to salads throughout the Spring, Summer, and Fall seasons. It has a goodly amount of vegetable protein in it for those of us who lack in that area, and is just delicious. Here’s my recipe, and it makes enough to feed my army:

Mix it up, play with the combinations of cumin, lime and cilantro to find your mix. This one is more limey, less spicy.

As I made the black bean salad, Flora prepared the vegetables for the rice pilaf (onion, celery and carrot.) Once it was time to start the pork, we started cooking the rice pilaf. Basically it is rice cooked in chicken broth and white wine, along with the vegetables and salt and pepper. (We omitted the bay leaf called for in the recipe.) You start by sautéing the vegetables in butter, then add the wine and cook until it is reduced by half. Add your rice, broth, seasonings; cover and simmer until the liquid has been absorbed.

I have to be totally transparent here and let you know the rice pilaf was the big surprise of the dinner! It went very quickly, everybody loved it and there was a bit of frustration among the kids when there were no seconds. I highly recommend this dish!

Since I was using a small Instant Pot, I knew I would not be able to cook all of the pork loin at once. I put 2 onions (quartered) in the bottom of the pot, added about 3.5 lbs of pork loins, and added 1 cup of chicken broth. I set it on manual for 35 minutes, let the pressure release 5 minutes naturally, then speed released the rest of the pressure. There was enough AMAZING pork in there to shred enough for everyone to at least have a first helping while I let the second round cook. With the first batch, I took most of the resulting liquid from the pot and put it into a saucepan, to which I added a goodly amount of my favorite BBQ sauce, Sweet Baby Ray’s Original. We let that simmer about 10-15 minutes, shredded the pork and poured the sauce over it. WOW!!!!!

This amazing meal was a hit all around. There were 10 people in the house, and everyone gave it two enthusiastic thumbs up. All that was left was dessert.

I feel like Flora really gets the short end of the stick in this blog because I don’t always see everything she does. She knows Lemon Meringue Pie is my favorite, so she brought over the supplies and she made it fresh. Fresh lemons were very briefly microwaved to help her get more juice from them. She did make a point of telling me that you want to be sure to do this BEFORE you zest them. Sounds like sage advice to me!

Just look at these pies before they got meringued! I could have buried my face in them right then and there. I am not kidding.

But, I was a good girl. I waited for the meringue and it was definitely worth the wait.

Ree Drummond, our dear Pioneer Woman, we sure do love your cookbooks. You have our hearts and our kitchens! We also love how your recipes inspire us to add our own little twists here and there. Thank you!